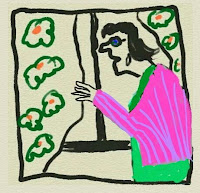 Why oh why was I drawn into it? I’ve never agreed with it, I don’t know who invented the dreadful ritual, I bet it was someone in America. Not that I have anything against Americans, I just don’t want to have to embrace every celebration that they have. I tolerate Halloween, but Secret Santa is a step too far. 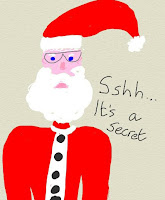 Anyway, I said yes. I must have been at a weak point, and I was asked by Mand, who has been a bit down in the mouth lately and has taken to saying ‘like’ a lot less. I should be pleased about that but I do miss it, in a way, it was an idiosyncrasy that I had grown to…well...like!
The Secret Santa had been an idea of Baz, he wanted everyone to take part who were regulars at his functions throughout the year. The giving of the wrapped tat was to be the focus for the Christmas event, an evening of carol singing in the pub, a buffet, mince pies, mulled wine and gifts. I cannot reveal who the recipient of my gift was in case you feel tempted to tell them and then it would spoil the essence of the evening, but I can say that they were extraordinarily easy to buy for. 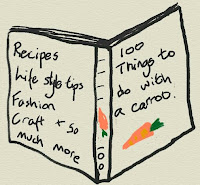 The evening was very pleasant, everyone was in lively spirits and both the food and singing were of a good standard. Then came the present opening, it was one of those uncomfortable occasions, everyone was handed their gift but took it in turns to open them, so we could all gauge the reaction.
Most of the presents were of the tame variety that no one could take offence at, socks or mugs for the men and scarves or toiletries for the woman. Jacinta was given a vegetarian cookbook, ‘A 100 ways with a carrot’, a clear re-gift from the meat raffle, although Reg didn’t bother with any secrecy, ‘I had to do something with it, me and Marg we like our meat, and no mistake’. 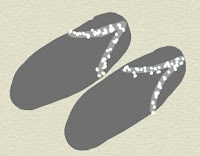 Reg was given a gnome holding a string of sausages, which did make him smile, and Garth was delighted with his sequin covered flip-flops, as was Mand who was beaming at his positive reaction. The book for Ken advising the best way to relax was hardly needed, but well chosen by the giver; Tom was very excited about his gift of a bag for life and a jar of pickled eggs, much more so than anyone could have imagined.


There were three of us in the circle of doom left to see what Secret Santa had in store. Raphe seemed initially pleased that it was clearly a book, but was less than enthusiastic to receive the autobiography of Gerry Halliwell, previously known as Ginger Spice, smiling through gritted teeth I could hear him hissing at Ian, ’That’s it, I’ve finally had enough, next year it goes’. I can only assume he means his hair colour.
Mand looked like an excited child as she too realised it was a book but her face almost crumpled into tears when she revealed the title, ‘How to attract and keep a man’. The whole group went silent, and I hoped the person who had chosen the present felt guilty about their lack of tact. However, things immediately improved for Mand when Garth swept across the circle, took the book from her hands and threw his arms around her, ‘You don’t need that’, he said, ‘You’ve got me.’ It was like watching a smaltzy channel 5 Christmas film and we all clapped and cheered. 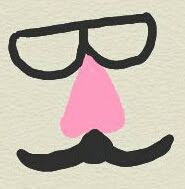 Then it was my turn, no book was hiding in this wrapping and my stomach lurched as I carefully pulled off the tape. The plastic false nose, glasses and moustache stared back at me, as the pair of toy binoculars fell from the packaging onto the floor. I managed a slight smile as I looked around the group. ‘Are you saying that you think I spy on you?’ The response was unanimous, ‘Oh yes, curtain twitcher.’ I was mortified.
Posted by Unknown at 07:46