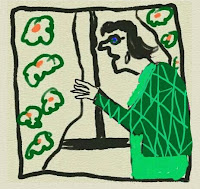 The street has gone Christmas mad. Blackpool illuminations has nothing on us; if that lonely man in the moon in the Sainsbury advert is looking down to earth he would certainly see Pavers Place. Ken started it, he bought one of those hideous inflatable snowmen that blow about irrationally in the wind, looking like a giant white sausage skin that has been caught above an air vent. It stands just inside the frontage to the shop but due to Hurricane Desmond it whips at any poor soul that happens to be walking past. He followed that with a few pathetic strands of lights wrapped around the bush at the front of Garth’s house which still protrudes threateningly into the path. 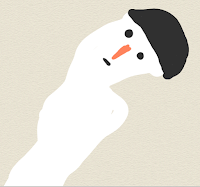 Reg was torn between being infuriated about the lights on the bush, ‘I think he’s mocking me’, and full of derision about the lacklustre display, ‘Call those Christmas lights?’
Harry and Gary have made space in the Spar for a full blown Christmas tree, the first time they had done this, usually they suspend paper decorations from the ceiling. The tree has caused offence to Tom, whose seat had been removed to make room for the tree, he now spends time prowling around the shop leaning against the freezer cabinets or nestled in the corner beside the household goods.
Even Jacinta and Prithpal had strung some lights around the conifer in their garden and Ian and Raphe have hung a Christmas wreath on the front door. Raphe made it at a class he had attended last Saturday and was so enamoured by the success that he is busily knocking together a few more, to sell at the school’s Christmas fayre next week. 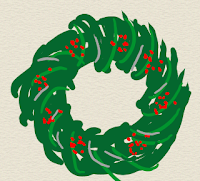 The only houses as yet unadorned are mine (I don’t do Christmas), Mand, who is still grieving after Garth gave the plastic tiara to Suzy, and Margaret and Reg, apparently these are still in the planning stage.
Although Mand has been mooning about since the Egg Tuck In Trial she has taken solace from the fact that Garth is back in flip-flops, a sure sign that he has parted company with Daphne. Roger and Suzy also seem to be back on track after he spent a night in the car after the event. I don’t know what time he bedded down into the Micra, but it was funny seeing him emerge the next day looking dishevelled and tired. It also reassured Suzy’s friends that far from being the down trodden women she was actually the ultimate keeper of the keys, they have been putting on public displays of affection ever since.

Reg spent a lot of time up a ladder on Friday at the front of his house, an unwise decision in this wind. Margaret stood at the bottom unravelling strings of lights, when she wasn’t running to catch the sheets of plans that were continually blowing down the road. From my lounge I could hear him shouting instructions at her, her voice in return was becoming more and more shrill. He finally managed to erect the frame of a Father Christmas sitting on a sleigh with a couple of reindeer pulling it along, which when switched on revealed a multi-colour flashing light display, enough to send anyone of a delicate nature into a full blown migraine. This was followed by a real Christmas tree in the small front garden which had further lights, beside which stood a couple of elves and a snowman. The scene was complete and there was only one word suitable to describe it – gaudy.

Reg was completely emerged in the Christmas spirit and invited all the neighbours to gather around his lights that night to partake of a glass of mulled wine, some homemade sausage rolls and a mince pie. Ken was magnanimous in his praise to Reg for all the effort he had put into the house, but he did point out the cost of the lights, both financial and environmental.

‘You’re lights are shiny for sure, but I’m harnessing the power of the wind, it’s costing me nothing.’
Last night Hurricane Desmond decided that he’d had enough of supporting the inflatable snowman and with a huge gust removed it from its fixings and blew it across the road. Reg woke up to find his Father Christmas sporting a white nylon covering that had completely entangled around the sleigh and the reindeer. The wind being too fierce for Margaret to let him recover it, his display will have to sit dormant until things calm down. When I saw him in the street heading towards Kens his face was very red and angry looking, I’ve a feeling he was harnessing his own wind and was intending to expel it in the barbers direction; I am in awe of the fleeting nature of the Christmas spirit.