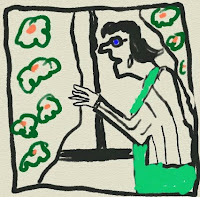 Ever since Baz and Shirl moved into the Short and Curlies the function room at the back of the pub has been a space given over to clutter. A selection of mismatched chairs and tables sit alongside the walls, surrounded by old bingo balls from a machine long defunct, shabby curtains, a few reams of bunting and a no longer shiny glitter ball. This year however the room was given a makeover and the inaugural opening event was a fish and chip supper, followed by a ballroom class and dance; although why anyone would want to trip the light fantastic on top of a greasy dinner is beyond me.

Shirl was beside herself with excitement, not only would she get to wear a low cut, slashed to the thigh dress, but she would be Pavers Place very own Tess Daly/Darcy Bussell. Shane the vicar had been roped in to join Shirl to judge the most improved dancer of the evening, the prize being a glamour makeover at the hands of Daphne for the lady and a new haircut by Ken for the man.
Everyone in the street had been persuaded to pay the five pounds and join in the fun for the evening, even I had succumbed to a ticket. Gary and Harry had donated a few gifts for a raffle and many teachers and parents from the school were also going to be in attendance. 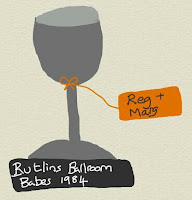 On the morning of the dance Reg was boasting to Catherine about his prowess on the dance floor, he and Margaret had won a dance competition at Butlins in 1984 and he felt that they would have lost none of their skill. Roger stopped to join in the conversation, Suzy had persuaded him to go along for the evening, much against his wishes, but he was more concerned if he won. He already had hair that could best be described as wayward, Ken’s hands on it could lead to all sorts of problems, and after all, he had a responsible job to hold down. Reg reassured him that there was little chance of that happening.
The makeover of the function room had been impressive, the walls were newly whitewashed and bright pictures adorned them, picking out the colours of the curtains at the windows. My own description would extend to the word gaudy, but it was definitely an improvement. Shirl and Baz had decided to keep the mismatched furniture telling everyone on arrival that ‘shabby chic’ was very 'in'. Reg failed in his attempt at whispering, ‘Shabby’s about right’ to Margaret, who rewarded his tactlessness with a jab in the ribs.
Once the fish and chips had been consumed Shirl took to the microphone to announce the start of the evening’s entertainment. There would be a dance lesson led by a local teacher, Elaine Preeps, after this there would be an intermission during which time there would be an exhibition dance by two local champions. At this point I could see Reg go very red and become suddenly animated, he grinned at Margaret who looked terrified; as Shirl said nothing further they got up with everyone else to take the dance lesson. After a swift waltz and a few basic cha cha steps the dancers spent some time practicing, before the dance off later in the evening.
Everyone sat down and Shirl picked up the microphone, as she did so Reg started to stand, straightening his tie and adjusting his jacket. Margaret was desperately pulling at his arm, trying to get him to sit down, then Shirl made the announcement. 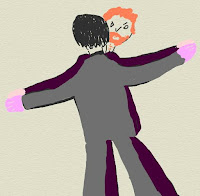 ‘We are delighted this evening to welcome to the dance floor, our very own championship dancers that also live in Pavers Place; performing the samba, followed by the jive, please welcome Ian and Raphe.’
Gliding across the floor they effortlessly performed the two dances. I say this, however I did spend a considerable amount of time watching Reg, whose mouth seemed to be moving but no words were coming out. He was redder than I have ever seen him and although Margaret was still tugging at his arm he actually slumped into the chair.
At the end of the dance the applause was rapturous and I wasn’t the only person who stood to show my appreciation. Reg had recovered his composure and did join in with the clapping. As the noise died down I could see Daphne lean over to Garth and give him her view on proceedings.


‘It’s a shame that Raphe is too good to win the prize, I could certainly do something with that skin.’ I can only hope that she keeps that particular gem to herself.
Posted by Unknown at 10:12